Many Hyundai and Kia cars equipped with Theta II (2.0 L turbo and 2.4L) engines may notice metal shavings in their engine oil.

In this article, you will find details about this problem. How to check if you have metal shavings in your oil, and what you should do if you find metal shavings.

Engine failures are reported to occur as early as 30,000 miles. These symptoms do not affect only US vehicles but also may be a common problem experienced by Kia / Hyundai owners worldwide. If you are having this problem, please use the comments section to let us know.

Kia and Hyundai engines equipped with the Theta II engine may show premature rod bearing failure. Once the bearings fail, the metal debris will contaminate the engine oil.

Contaminated oil with metal shavings does further damage to the internal engine parts. As the oil circulates through the engine, it can cause excessive wear and damage to other areas of the engine such as lifters, clog oil galleries, and restrict oil circulation.

If you catch this problem early enough, you may be able to slow down the failure, but eventually, a new engine or complete engine rebuild will be required.

If you have found metal shavings in your oil and your Kia or Hyundai is still under warranty, you may be able to get your dealer to fix your car free of charge. Kia and Hyundai have issued a recall of over 1 million vehicles. Keep in mind that you will need to prove that you have performed regular oil changes and that the oil level was not low at the time of failure.

Kia/Hyundai vehicles with either 2-liter or 2.4-liter gasoline engines have been identified with this problem. The U.S. engines were made at the Hyundai's engine plant in Alabama. The list of vehicles to be recalled in the U.S. includes:

This may be a limited listed. Our members worldwide are reporting that they are experiencing this problem in other countries as well. The bigger problem is that once the crankshaft bearings start to fail, the metal shavings can block the oil passages and cause catastrophic engine failures.

As clearances in the bearings and crankshaft increase, your engine oil pressure starts to drop. To correct this problem, you can install a high volume oil pump.

You can't eliminate factory defects, but there are a couple of things you can do to make your Hyundai / Kia engine last longer.

Back in 2015, the model year 2011, 2012 Sonatas were recalled over the chance of engine failure from limited oil flow to the bearings. Similar wear has been found in seized Kia engines. The affected Hyundai engines were assembled in the U.S. Complete details on this lawsuit can be found here.

Warranty Extension: Hyundai is extending the Powertrain Warranty for Class Vehicles. The extension of the warranty will cover the engine short block assembly consisting of the engine block, crankshaft and bearings, connecting rods and bearings, and pistons for 10 years and 120,000 miles (whichever comes first) from the original sale or lease of the vehicle. The 10-year / 120,000-mile extension of the warranty continues even if the vehicle is sold.

If your Hyundai or Kia is part of the recall, contact your dealer to get your engine replaced for free.

Kia will notify owners, and dealers will inspect the engine assembly and replace the engine if necessary, free of charge. The recall began in June 2017. Owners may contact Kia customer service at 1-800-333-4542. Kia's number for this recall is SC147.

This issue is typically discovered during an oil change. This article covers the common problems, symptoms, and troubleshooting tips related to the metal shavings in the oil of Hyundai and Kia vehicles.

💡 Do you have this problem?
✉ Send Feedback

In your write up you mentioned that one of the ways to manage the problem is to "install a high pressure oil pump". However you failed to give an example of one that is compatible and will work. Can you let me know ?

In this article we come to know about the hyundai kia shaving oil theta ii enginee. We come to know that how it helps during selection. So, anyone searching for same topic may find their shelter over here. Thanks for this wonderful content.

I have a 2017 Sonata. I received a card to bring in my car to have the ECM reflashed. They wouldn't tell me why so I looked it up, it is for the same problem that the 2015 and prior Theta II Engines had. When I changed my oil prior to taking it in there were bits and pieces of bearing material in the oil. And a couple months before that there was smoke coming out of my exhaust when I was getting on the freeway. I told the service writing about the metal bearing shavings in my oil and showed him the photos. He said Hyundai wouldn't replace the engine unless it started to knock badly, smoked badly or failed. Now my intake cam CVVT assembly went out, I think because it got metal shavings inside it and ruined it. All this is a happening at 65,000 miles. Even a 1970 Pinto lasted longer than that. I feel their mistake during manufacturing goes past the 2015 lawsuit. I think the lawsuit ended for 2015 but not the problem. Now all this metal debris is pumping through my engine ruining everything else that Hyundai won't cover with the warranty. I bought this car for reliable transportation, but it smokes and breaks down more than my 30 year old Jeep Cherokee. Sad that I have to rely on my 1990 Jeep Cherokee and worry about my 2017 Sonata like it's a beater car.

I saw metal shavings on my camshaft position sensor. As it was throwing a code to replace. Changed the oil, havent checked for more metal yet. The motor went in limp mode. Had service throw the meter on it comes up in the flow chart to replace engine. Kind of a drastic message. It is a 2016 kia optima 2 liter turbo, 90k miles. I guess i am out of luck. 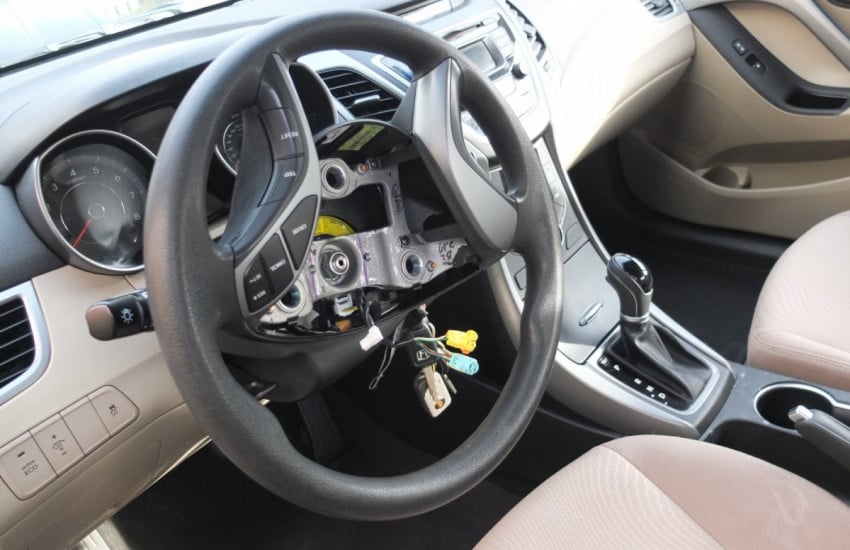 In this guide, you will find step-by-step instructions on how to replace a Hyundai driver's airbag.  These instructions are for Hyundai Ela When you start up the engine, your Kia or Hyundai, you may display a warning message that states: Align Steering Wheel In this guide, you will find instructions on how to replace the ignition coils on Hyundai and Kia Theta II  engine. In this tutorial, you will learn how to change the cabin air filter on multiple Kia and Hyundai vehicles. In this guide, you will find step-by-step instructions on how to change the sway bar links on a Hyundai vehicle.