If you own a Mazda that has developed erratic shifting patterns or are looking to buy one, this article will help you learn about some of the most common problems with Mazda automatic transmissions.

If you own a Mazda with an automatic transition that is not shifting properly or not shifting at all, check the transmission fluid level immediately. Mazda vehicles that use a transverse 4-speed automatic transmission designated as LA4A-EL can experience problems ranging from gear slippage to erratic or failed gearchanges. In most cases, this will happen suddenly, and usually when the car is warm. This will trigger a check engine light, and the Overdrive indicator on the dashboard might be flashing. Sometimes, the problem will go away after cooling down.

Mazda MPV models that use a 5F31J 5-speed transverse automatic transmission can fail to engage reverse gear. In the most common scenario, this happens after changing the transmission fluid. This will not affect forward gear changes, and there will be no other apparent issues.

Mazda vehicles that use a 5R55N 5-speed automatic transmission have a fairly common problem with failures to engage 4th and 5th gear. In some cases, this will be followed by erratic and delayed changes in other gears. This issue can be intermittent or constant, and initially, the problem will only occur when the car is cold. It will trigger a check engine light, so corresponding codes are stored in the DTC memory.

Mazda that uses a 4-speed 4R44E automatic transmission in a longitudinal arrangement suffers from a fairly common issue with overdrive gear engagement. The problem manifests itself as a failed engagement of overdrive gear, resulting in a shift to neutral. In initial phases, this will be an intermittent issue that happens when cold but might progressively get more frequent. This issue will not affect other gears and will not trigger any warning lights on the dashboard.

Newer Mazda vehicles with a TF80 6-speed automatic gearbox in front-wheel or all-wheel drive configuration can suffer from shift flares during mild accelerations. In some cases, while braking to a stop, downshifts may be noticeably delayed. In initial phases, this issue will manifest itself only when the vehicle is cold but becomes more prominent with time. In most cases, there will be no other symptoms.

At this point, you are thinking, that's a lot of problems. So naturally, the question comes to mind "Are Mazda transmissions reliable?".

Mazda vehicles were notorious for automatic transmission problems in the early 2000s, especially the 626, Millenia, and MPV models.

From 2005 to 2020, Mazda automatic transmissions in Mazda 3, 5, 6, CX-7, CX-9 have been very reliable with very few transmission issues. That doesn't mean that Mazda transmissions never fail.

Mazda vehicles that are not maintained properly or are used for towing have a higher automatic transmission failure rate. In this guide, you will find instructions on how to change the serpentine belt (engine drive belt) on Mazda's four-cylinder engine. In this guide, you will find step-by-step instructions on how to change the engine air filter on Mazda vehicles. 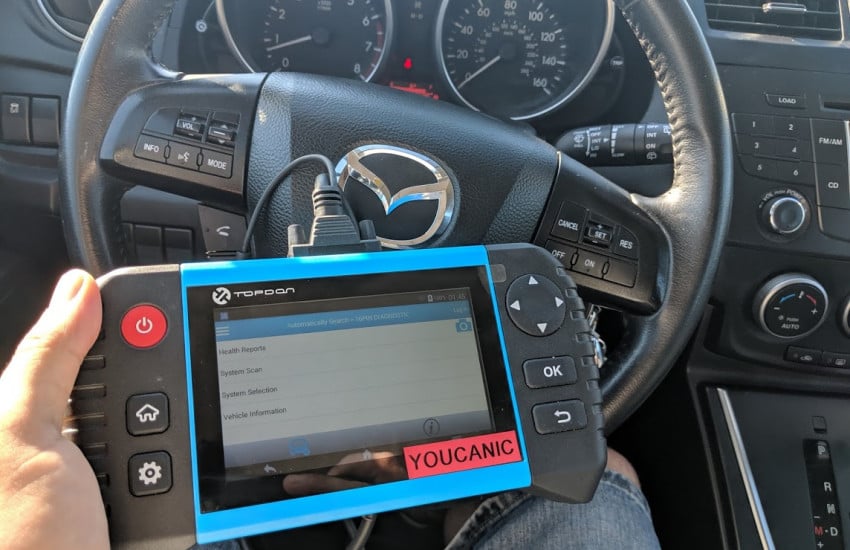 This guide will learn what Mazda check engine light (CEL) means, common causes, and how to diagnose Mazda CEL yourself.

In this guide, you will find instructions on how to reset the Mazda TPMS light.