Many Kia Rio, Optima, Sedona, Forte owners have complained about the airbag light coming on either intermittently, blinking, or illuminating and staying on while driving.

Everything else in the car operates as normal in all of these cases, aside from the airbag light being on.

What does Kia airbag light mean?

It means that the restraint system has detected a problem with one of the airbags or airbag sensors and the airbags may not deploy if you get in an accident.

In this article, you will learn about Kia airbag problems. What can trigger airbag / SRS light to come on and how to troubleshoot Kia airbag light yourself.

List of problems that can trigger Kia airbag light to come on:

To find out why your Kia airbag light is on you will need to read the fault codes from the airbag module.

You need a scanner that can read airbag codes.

Popular scanners that can read Kia airbag fault codes include Launch Creader and Foxwell for Kia/Hyundai which is an all system scanner.

Here is a list of common problems that can cause the airbag light to come on in your Kia car.

The airbag / SRS module consists of multiple components, and any of them could malfunction. Without reading the codes it is hard to know the root of the problem. Often this will trigger B1448 OBS Mat Defective fault code. Other trouble codes can be triggered such as B1447 B1448 B1764 B1767 which point to a faulty seat occupant sensor mat.

The light should be ON when an infant or child is sitting on the passenger seat.

If the occupant detection sensor is defective it needs to be replaced. The first thing you need to do is call your Kia dealer and check if there is a service bulletin out for this repair. In other words, the dealer may fix this problem for you free of charge if there is a recall on this issue.

It is possible that you may trigger the airbag / SRS warning :

In such cases the vehicle detects low voltage and the airbag control module triggers the airbag light. To avoid such problems, you should always turn off the ignition and remove the key when you replace the battery.

If you have a dead battery, it is best to fully charge your battery with a trickle charger.

Always remove the key from ignition if you are checking fuses and especially if you remove the airbag fuse.

Next, follow the instructions on how to read and clear the codes from the airbag control module on a Kia. 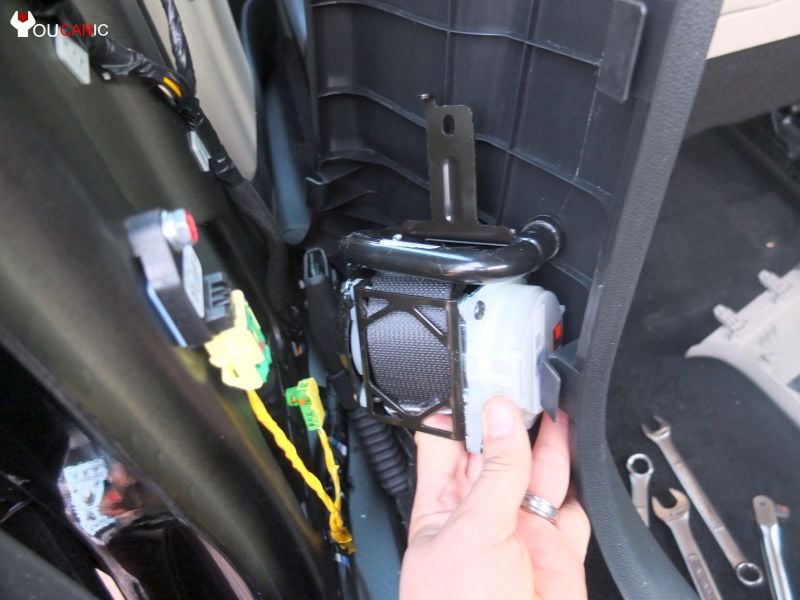 It is important to understand that Kia's airbag system is controlled by the airbag (SRS) module, which is a computer component.

This component runs a particular type of software that is written specifically for that component (in this case, the airbag system) and the software runs on a chip, called an EEPROM.

The software dictates how the airbag system operates. In some cases, the EEPROM needs to be updated and reprogrammed because of an error. This problem has to be handled by the dealership, as they may send the unit off to an IT company which reprograms it and sends it back to them, at which point they can reinstall it in your vehicle.

If you have the dealer diagnose the vehicle in most cases, they will recommend replacing the module. It is possible however to get your existing airbag module reset.

These services will clear both hard and soft codes from the airbag module. Once you receive your unit back, you will not need to do any additional programming or go back to the dealer for programming.

If the SRS system in your Kia is not working properly the airbag warning light will illuminate in your instrument cluster. When there is a problem with the passenger detection system the PASSENGER AIR BAG "OFF" light will not turn on  and the passenger airbag may deploy even if there are no passengers in the front seat.

Furthermore, in February 2016, Kia issued a service bulletin, which is given to all Kia dealerships service departments, providing information on the replacement of a weight sensor mat, located in the front passenger seat.

The purpose of the sensor mat is to detect child seats or other lightweight occupants who could be harmed by the deployment of the passenger side airbag in the event of an accident.

If the sensor mat is not operating properly (meaning that the airbag would deploy if a lightweight occupant was present, which could potentially harm them), then the airbag light on the instrument cluster will be lit and a few diagnostic trouble codes could be stored: B1447, B1448, B1449, and/or B1550.

Kia extended the warranty coverage for this repair upon the release of this bulletin to 15 years / unlimited mileage, starting from the date of first service. Coverage will be provided for its replacement provided that the condition is not caused by external damage to the sensor mat. Do you know what the code B1258 is, I don't see it listed above? The mechanic said it was front impact sensor. He said inspected the connection at air bag module and impact sensor, sensor was cracked causing communication error. $550 to fix.

My 2009 Kia Optima's airbag light stays on. Dealer told me it is caused by a defective seat belt. Will the airbag still deploy? Could a loose connection cause the problem?

MY 2005 KIA SEDONA HAD SO MANY MAJOR PROBLEMS I DEMANDED A NEW ONE . THEY GAVE ME A 2007 KIA SEDONA EX AND YOU NAME IT AND IT HAPPENED . HIGH PRICED CRAP . MY SONS 2013 KIA SOUL EATS TIRES , THREE SUNROOF ISSUES , AND ENGINE HAS A IDLE FROM SMOOTH TO WHAT APPEARS TO BE A MISFIRE NOT TO MENTION AT ANY GIVEN MOMENT ON HIGHWAY IT WILL EMIT A DENSE HUGE CLOUD OF WHITE SMOKE FROM EXHAUST BLINDING ALL BEHIND IN THE PACK . EASILY PUT I WOULDN'T TAKE ANOTHER KIA FOR FREE . THEY LOOK GREAT BUT THEY ALL HAVE NUMEROUS MINOR AND MAJOR DANGEROUS PROBLEMS AND KIA LIKES TO HIDE AS LONG AS THEY CAN . SO TO KIA I SAY ; BYE BYE ...............................

If the Kia Soul pushes out white smoke when driving, your engine may be burning oil. You might want to have that looked at. If its a gasket leak, your engine may run out of oil and seize up.

Hi can you please advice on how to reset my safety belt after my air bag were deployed now i cant pull the safety belt.

The recommended solution is to take the car to the dealer and replace the seat belt. But that will cost you several hundred dollars.

There is another solution though. There are companies that will repiar your seat belt for under $100. You just have to remove it and sent it in.  See more detials about this soultion here: https://www.youcanic.com/solution/seat-belt-wont-retract-after-accident

If you get into an accident there is no guarantee that your airbags will work. Which it can be difference between life or death. Other that that, the car will run and drive fine. I am not going to tell you drive it or not. It's your call. But make sure to get the airbag light diagnosed sooner rather than latter. You never know when you will need the airbags to work.

Hi my sportage mk2 has its airbag light on constantly my machanic has put his fault analyser on and it shows no faults. Any ideas? I have had the airbag control module replaced but the light came back on after a couple of months.

If I disconnect the passenger side airbag sensor, does that mean it remains on or off? The reason I ask is because I want to use a cushions with it but this makes the sensor turn off the airbag. It's a 2017 sportage.

How hard is it to diagnose the S R S problem with an air bag scanner?

2013 Kia Rio has airbag light on during driving. Is this year Rio in the list on Recall?

Sunju - I would call the dealer and give them the vin number. They will tell you if there is an open recall. Or go to the National Highway Transportation Adminitration website.

Oliver - Reading and clearing SRS codes with an OBD2 scanner is very easy.

My 2015 Optima LC has the airbag light on, but after trying 3 different code readers, and having o'Reilly check as well, still not throwing a code. Passenger airbag OFF light works just fine.. any ideas? Last resort is the dealer as they want $110 just to try to read a code.

My airbag light is on and will not go off. How much will it cost to fix it. I have a Kia Sportage LX/EX 2009

I have a 2017 Kia Cadenza, Everytime I put a seat cover on my front passenger seat the air bag off light stays on when someone is sitting in the seat I always put seat covers on my front seats to protect them even a folded towel will activate this light. Are the seat sensors that sensitive?

How to replace Kia Oxygen Sensor

Kia Key Battery Replacement
Vehicle
Kia
⤷ Feedback!
Help us improve this article by submitting a comment. All feedback, suggestions, comments, and corrections are welcomed.
💡 Need Help?
Join our community to get help with your car questions, show off your ride, connect with car enthusiasts, mechanics and more. It's easy, fast and free. 👉 Continue