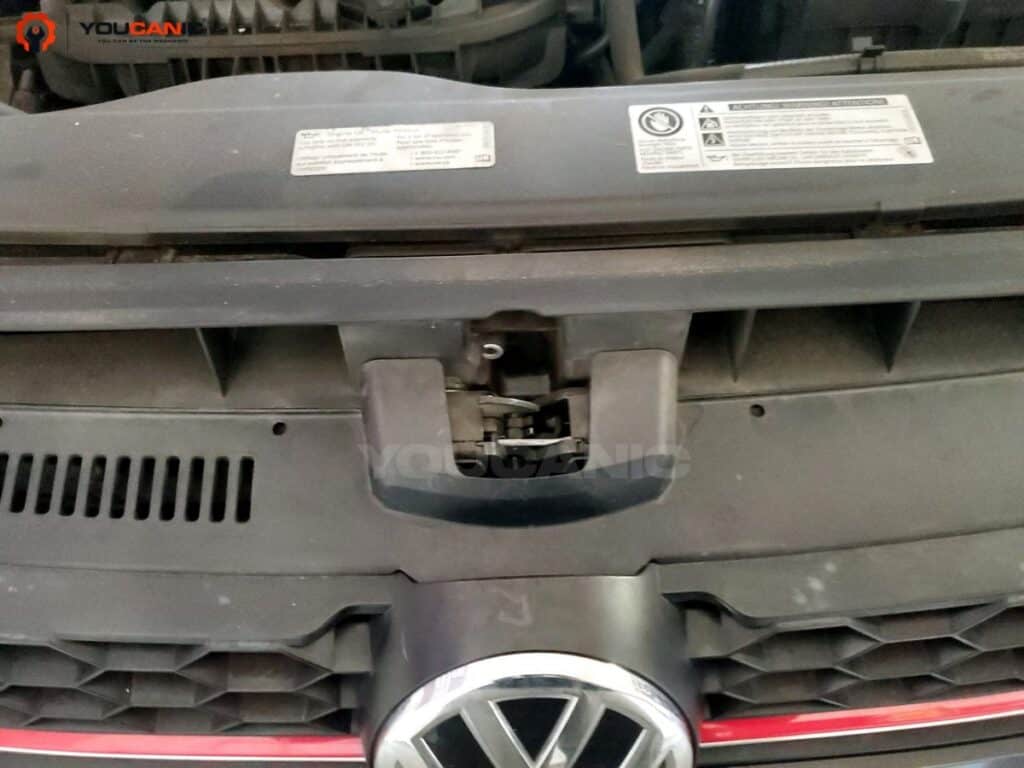 The most common problem that causes a Volkswagen MK7 to get stuck and not open is cable issues. In most cases, the cable comes off the hood release handle  (located under the dashboard, driver’s side), but in some cases, we have seen problems with the union box breaking (located in the engine bay).

The broken hood release on a VW is a recurring problem in many Volkswagen vehicles. It can cause you a major headache if you never have a VW hood that won’t open. Below we will discuss how to identify the problem and fix it.

The most reliable part is the hood latch itself. The physical latch for the hood is pretty reliable because it is mechanical and only has one plug. The issue most people run into is with the cable and handle that activates the latch.

Starting inside the cabin on the left-hand side of the driver’s footwell is the hood release handle. This chunky L-shaped handle is made of plastic, and the hood release cable sits in a small pocket inside the handle. This pulls the cable allowing you to access the engine compartment. The cable is stout and hard to actuate. In contrast, the plastic is brittle, which often leads to the pocket where the cable sits breaking.

How To Replace a Broken Hood Release Handle

Thankfully, this is the simpler of the two issues and only takes about ten minutes to repair. Here is a quick guide to opening the hood if the handle breaks.

If you need to access the engine immediately, use a pair of pliers to pull the metal ball on the cable’s end. This should release the latch so you can open the hood. I caution you, again, about the strength of the cable spring. It is hard to operate, but if you pull too hard, the union in the middle of the cable can break.

The hood release cable has a connection point above the driver’s headlamp; this is true for right or left-hand drive.

Inside this slim black and white box is a metal ball and a plastic cup. The cup takes a remarkable amount of force to move. The union is made of innovative German plastic that has the dexterity of thin glass and often cracks and breaks.

How To Open a Stuck Hood on an MK7 Golf

Your only option is bypassing the broken coupler on the union to open the hood. This is more time-consuming than the first issue as you need multiple tools that you may not just have lying around, like Torx bit or “star” bits and a ratchet wrench. It can be a tight fit to get your hand in there, but it can be done. However, if you have the tools and an hour or so, here is how to open the hood on a VW Golf MK7 because it is stuck due to a broken cable.

Problems like these are a good reminder to always keep at least a small amount of tools in your vehicle. For German cars, it is great to have Torx bits, an assortment of metric sockets, ratchet, screwdrivers, etc.

Also, consider a torque wrench in case you have to change a wheel and an OBD code scanner so if you end up stuck on the side of the road, you can check the codes and see if you can get back on the road on your own or if calling a tow truck is the better option.

We hope you find the How to Open a Stuck Hood guide helpful. Check these troubleshooting and repair guides for more help on your Volkswagen.