If you own or are considering purchasing an MK7 Volkswagen, it could be a Golf, GTI, or the illustrious R, you have landed in the right spot. All over the world, German cars are known for their reliability, but every machine has its faults, and the MK7 is no exception. In this article, we go over the most common problems that affect VW MK7.

What Does MK7 Mean?

MK7, for the uninitiated, refers to mark 7 or the 7th generation on the legendary Volkswagen Golf. The Golf was released in 1974 and has long been considered the gold standard of hot hatchbacks, and in 2012 Volkswagen was not ready to give up that title. These cars were released in Europe in 2013 and 2015 in the North American market and were produced until 2020.

The Golf received a facelift in 2016, which included minor cosmetic changes that are not compatible with the older models. These are known as MK7.2’s. This Generation Golf came in several different variants with many different engines. Volkswagen made two and four-door hatchbacks and even a station wagon with more ground clearance and all-wheel-drive known as the All Track. Let’s look at issues you may have to deal with if you own a VW MK7.

The powertrains referred to here are the gasoline-powered variants, as those are the most common ones in the North American market. The BlueMotion diesel engine will be covered in a separate article.

Early 2015 GTI models had issues with turbo failing. Luckily, Volkswagen caught this problem early, and updates were made to the turbo to stop it from occurring. Most of the vehicles were repaired under warranty, so be sure to check your car’s service records.

The water pump and thermostat are one unit, and the housing is plastic. Heat cycling of the engine forces the plastic to expand when it is hot and then contracts when it cools, causing the housing to warp or crack over time.

The oil pan is made of plastic and has a plastic drain plug. This plug must be replaced after every service. Failure to do so can cause the plug to leak. Heat cycling of the pan is also an issue that can cause the pan to warp.

If you own a manual Golf, GTI, or R and plan to upgrade the performance, be aware the stock clutch is very weak. Basic ECM tuning from companies like APR can cause the clutch to slip, so be sure an upgraded clutch is on your list.

The subframe bolts are torque to yield and have stretching issues causing a clicking or clunk noise in the front end when going over bumps, braking, or hard cornering. If you encounter this noise, it is extremely common and easily remedied.

You will come into contact with quality-of-life issues regularly, and they can make your life with a vehicle much harder. These are issues that range from minor inconveniences to downright unbearable conditions.

The hood release cable breaking is a super common problem on the MK7. The hood release is actually two cables with a union above the driver headlamp. This union consists of a metal ball and a plastic cup. The cable with the plastic cup takes serious force to move and is well known for exploding. When this happens, you can no longer open the hood.

On the other end of the hood release lies the handle, which has its problem. The cable has a metal ball at the end that sits in a pocket inside the handle. Since the cable requires so much pressure to operate, the pocket in the handle can break.

The fluid level sensor inside the window washer tank collects contaminants and gives a false reading on the dash saying to add washer fluid. This is easy to diagnose when the light is on, and the tank is full; you know who’s the culprit.

When the MK7 Golfs were first released, there was a serious issue with water incursion. The frame containing the sunroof is made of plastic and acts as a rain gutter. When the assemblies were installed in the factory, the torque specs were too high, causing some to crack and let water enter the cabin.

On all four corners of the sunroof, assembly is long drain tubes funnel water out of the tracks and safely to the ground under the car. Over time, these tubes can get clogged with debris causing water to back up and enter the car. This can be avoided by periodically opening the sunroof and checking the drains for standing water. Never use compressed air to clean the drains if you find water. The pressure can cause the hose to detach, and the headliner must be removed to correct it.

This should not discourage you if you are in the market for one of these wonderful cars. The MK7 Golf is well-made, reasonably priced, and reliable by almost any metric. In my eleven years of experience as a professional automotive technician, I have never come across a brand or model without issues from launch to final production. But what do I know? I’m just a registered Volkswagen technician who personally owns a 2015 GTI.

We hope you find the 10 Most Common Problems of VW Golf MK7 guide helpful. Check these troubleshooting and repair guides for more help on your Volkswagen. 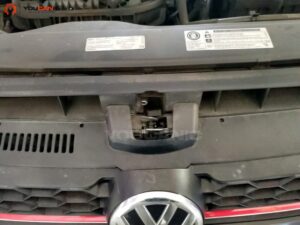