The front hood or frunk on the Tesla only opens a little when you open it. A simple upgrade is to replace the hood lift struts, which allows the frunk to open up on its own completely when you press open on the touchscreen or your Tesla app. Replacing the frunk struts on a Tesla is easy and takes less than thirty minutes. 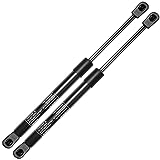 The original struts can also wear out after several years, leading to the hood not staying up when it is closed.

One thing to remember is that if you install upgraded status that opens the frunk automatically, closing the hood will require a little more force. Also, the hood may buckle up slightly, but it will be unnoticeable. Enjoy your Tesla frunk opening without having to touch or lift it. Evannex is an independent company that also makes lift supports for Tesla, which allows the frunk and trunk to open automatically.