The Mazda 3 has a fuse box that controls various electrical components. The 2004-2008 Mazda 3 models have the fuse box in the engine bay, near the battery. To ensure the proper functioning of the electrical system, it is important to have a clear understanding of the fuse box diagram and the location of each fuse. In this guide, we will provide a detailed diagram of the 2004-2008 Mazda 3 fuse box, including the fuse location and purpose for each fuse. This information is essential for troubleshooting electrical issues, replacing a blown fuse, and performing regular maintenance on your Mazda 3.

The fuses are located in two places.

It is located inside the car, passenger side. Under the dash. Above the passenger footwell. Remove the fuse box cover by shifting the two tabs. Twist the tab shown above and pull down on the fuse panel. Pull down the fuse panel. 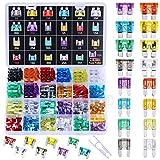 Is the radio, cigarette outlet, or lights not working on your Mazda 3? A common problem could be due to a blown fuse. Learn where to find the fuses on a Mazda 3 car. Is your Mazda 3 not starting? Are you trying to troubleshoot a dashboard warning light? If yes, check out our guide on diagnosing vehicle problems like a mechanic.