Power lift gates have become widespread in SUVs, Crossovers, minivans, and sedans. These gates are either fitted with hydraulic struts or electric ones. Buick and some GM cars used electric struts to power the electric liftgate (trunk).

Buick electric struts, like other things, do not last forever; they would fail after some years of service. Fixing your Buick’s electric struts is relatively easy; you may follow our instructions below to replace your electric trunk or boot struts. This guide provides instructions on replacing electric boot struts or trunk struts. 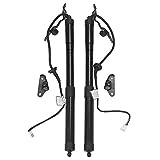 How do power liftgate struts work?

A power liftgate is a motorized hatch that opens and closes electronically. You can activate the system by pressing or holding a button inside the car, key fob, or hatch itself.

How long should trunk struts last?

On average, if your car has been used gently and the trunk is not used regularly, you can expect your trunk struts to last about ten years. Five years is probably all you can expect if you have used your car as a workhorse.

How much to replace the front struts?

We hope you find the Trunk Electric Strut Support Replacement DIY guide helpful. Check these troubleshooting and repair guides for more help on your GM and Buick.