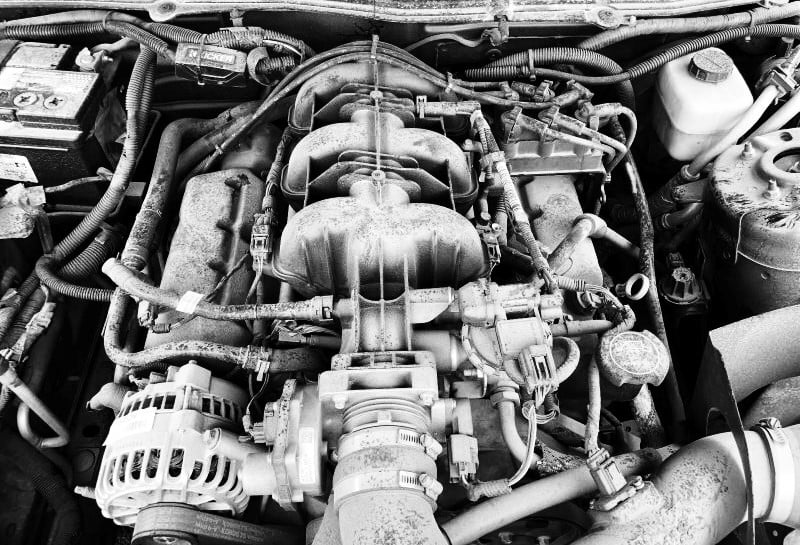 Have problems with your Ford 4.0 SOHC Cologne V6 Engine? Learn the most common that you may encounter and learn possible solutions to solve the problem.

The Ford 4.0 SOHC engine’s design is far different from other Over-Head-Cam V6 and V8 engines; it optimizes using a crankshaft to drive both overhead camshafts using timing belts or chains directly.

In the 4.0 design, Ford has optimized the use of an intermediate jackshaft. This shaft serves as a countershaft, allowing the left camshaft to drive the front crankshaft and the right camshaft to be driven from the rear timing chain.

The Teflon camshaft chain tensioners, called cassettes or guide rails, along with the hydraulic chain tensioner, keep proper pressure on the chains, thus keeping this complicated network of chains and countershafts in sync.

Due to the weak design of the Teflon chain guides (cassettes), these guides have tendencies to stretch, resulting in the chain rattle. The same noise problem can further develop into guide breakage, which may scatter debris on the engine and throw the valves and pistons timing off.

Another cause of chain rattle is the oil sludge build-up on the hydraulic tensioner, which prevents the chain from getting the proper tension. Although this is a non-interference engine (meaning that the valves will never hit the pistons), it still creates expensive repairs for the owner.

Can you fix the Timing chain rattle on your own?

We do not recommend fixing the cassette problem on your own; the access points to these components are unreachable without removing the engine from the car; also, you need to purchase special tools to remove these components.

The common symptom of cassette or hydraulic camshaft failures is chain rattles which can be heard in front of the engine or at the back.

Verify the condition. Obtain the correct kit and follow the sheet supplied with the kit.

The Harmonic balancer for this model consists of the center hub, which seals the timing cover and attaches to the next part, the reluctor ring. The reluctor’s teeth are used by the crank sensor to determine the crankshaft position. There is also a third outer part commonly known as the crankshaft pulley. These components are joined by a dense rubber designed to absorb engine vibrations.

Over time, the opposing forces from different loads on the serpentine belt, along with engine heat and exposure to engine oil, take a toll on the rubber, weakening its structure.

The assembly continues to loosen up until it separates; when this happens, the debris from the harmonic balancer could hit the radiator or the fan blades causing expensive repairs.

Can you fix a Ford 4.0 SOHC with a separated harmonic balancer?

Before you take this route,  you need to understand that a special tool designed by Ford installed the crankshaft bolt, and this device was phased out a long time ago; also, the bolt is not reusable.

Valve cover on these models is known to crack at extreme temperatures. It may develop a crack in extremely cold or extremely hot weather. A crack from this side of the engine would cause a significant oil leak and may deprive the engine of its lubrication requirements.

Can you fix an oil leak on this engine yourself?

There are several engine valve spring breakage occurrences on this model, which shows up at only 60,000 miles. These breakages cause engine damage from valves falling into the combustion chamber and being compressed by the piston, resulting in engine failure requiring a complete engine rebuild or replacement. Symptoms of valve spring breakage include engine misfire and unusual loud knocking noise from the top of the engine.

Can you fix a broken valve spring by yourself?

This job requires removing the engine from the car and rebuilding the engine. Engine rebuild should be done by a professional mechanic and a reputable machine shop.

This Ford engine is also prone to overheating due to coolant leakage from old coolant hoses and water pump seals.
Water pumps’ impellers may disintegrate due to rust. As a result, coolant can no longer circulate.
Another possible cause of overheating is the Thermostat. Its housing may crack due to corrosion or be stuck in a closed position.
If the overheating progresses, it may cause the cylinder head gasket to leak or crack.

Common symptoms of an overheating engine are coolant loss, over-flowing from the coolant reserve, and a very high-temperature gauge reading.

Can you fix a Ford 4.0 overheating problem by yourself?

If the overheating problem is caused by coolant leakage from the hoses, then fixing the problem is as easy as learning to shift on an automatic transmission. However, suppose the cause of overheating is a faulty water pump or cracked water pump housing. In that case, you may experience great difficulty in removing the clutch fan, which may stop you from moving forward with the repair.

Symptoms of an engine misfire

Can you fix a Ford 4.0 engine misfire by yourself?

Spark plugs, ignition coils, and injectors are easy to replace. However, pinpointing the actual culprit is not an easy task, even for an intermediate DIYer. You may end up replacing everything, but the problem may persist.

DPFE sensor is a part of the EGR system used to monitor the pressure difference of exhaust gasses versus intake manifold pressure. DPFE sends a signal to ECU, then ECU sends a command to  EGR to regulate the amount of exhaust gas feedback to the intake manifold. In conjunction with EGR, it helps with fuel efficiency because some air and unburned fuel from the exhaust is sent back to the combustion chamber, thus adding more power to the engine.

If DPFE fails to send the proper signal to the ECU, it will cause the EGR to let more exhaust gasses feedback to the intake manifold causing a lean condition that greatly affects engine performance.

A common symptom of defective DPFE is an illumination of the check engine light with fault codes p1408 and p0401. There would also be hesitation issues and erratic idle due to lean fuel conditions.

Can you replace  DPFE sensors by yourself?

DPFE sensors are easily accessible and are easy to replace on your own; all you need to do is find the sensors, disconnect the electrical connectors and pull the sensors. Reinstallation is just a reverse of disassembly.

EGR or Exhaust Recirculation System takes some unburned fuel and air from the exhaust back to the intake manifold for combustion. Below are some common failures from EGR components on this model.

Another common problem with Ford is the ERG tube failure. The EGR tube that feeds into the plastic upper intake of the O-ring could fail. When this happens, the engine could stall, have a rough idle, and fail emission tests due to unregulated outside air coming into the intake manifold.

Due to possible lean conditions, there could be erratic idle and loss of engine performance. There is also a possibility of Check engine light illumination by throwing p1408 and p0401 codes.

Can you fix a broken EGR tube by yourself?

We do not recommend replacing this tube yourself; this part is exposed to exhaust heat and corrosion, which may give you a hard time loosening the bolts. Also, it is difficult to access the retaining bolts and connectors for this part and may require you to do acrobatic stunts.

Can you replace a damaged catalytic converter yourself?

Removing exhaust bolts to remove the catalytic converters requires lifting the car and heating the bolts with an acetylene torch. If you have no access to the acetylene torch, we do not recommend doing it yourself. Although you can buy an acetylene torch, you need to buy acetylene and oxygen tanks and their contents, which are very expensive.

Due to lean conditions, the engine may stall at idle,  run rough, and check engine would illuminate with codes  po171 p0172 engine is lean.
This issue is often blamed on faulty oxygen sensors, and as a result, a lot of oxygen sensors are replaced without any positive results.

Can you fix a broken intake gasket by yourself?

You can easily replace your Ford 4.0 intake gasket; you just need to have a torque wrench and information regarding the proper torque specifications for the bolts.

If you are planning to buy a Ford with this engine, you have to think twice because of too many issues that are plaguing this engine; you could end up wasting too much money on repairs.

If you need a replaced Ford 4.0 SOHC V6 engine, we recommend buying one newer than 2002, as many of these issues were resolved for those models.

We hope you find the Ford 4.0 SOHC Cologne V6 Engine Problems guide helpful. Check these troubleshooting and repair guides for more help on your Ford.