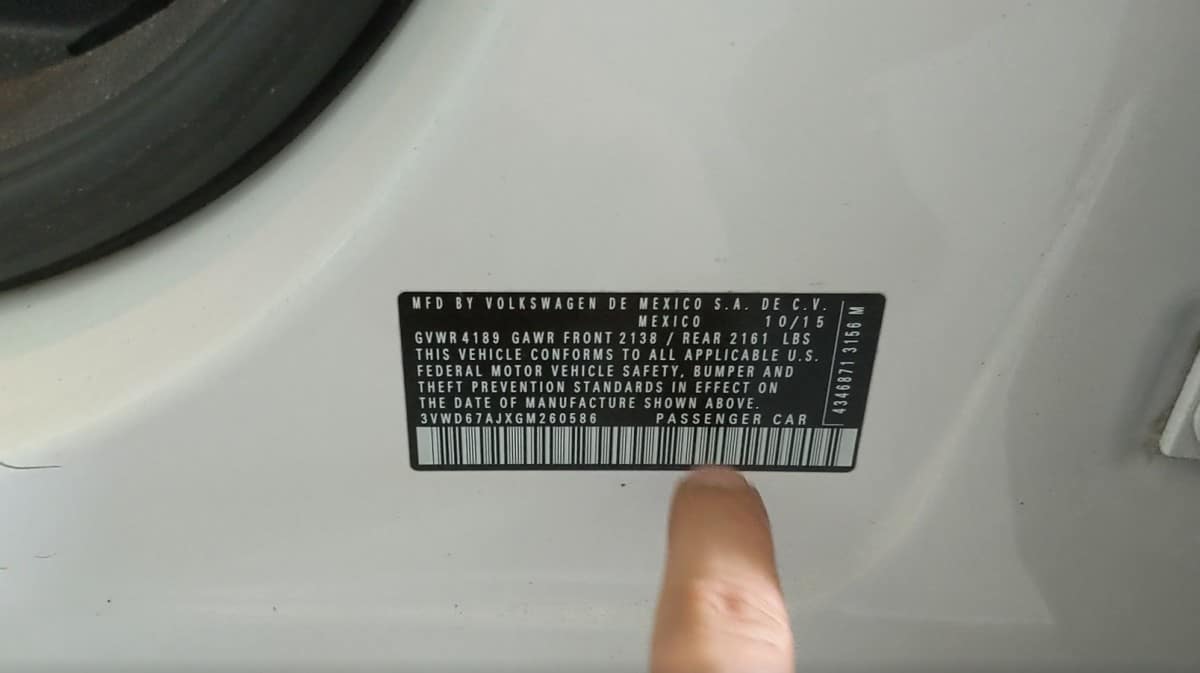 A free Volkswagen VIN decoder allows you to look up options, models, years, engines, transmissions, and specifications. In addition, you can also check the title records and accidents by clicking Check History.

To check what engine, transmission, and options are installed on your vehicle, use this free online VIN Decoder Tool.

How to Decode VW VIN Number

The first three digits uniquely describe the manufacturer of the vehicle. There are many hundreds of assigned combinations.

Describes the region where the vehicle is made.

It generally describes the manufacturer of the vehicle. For VW, this is usually ‘V,’ but sometimes not. It is assigned in conjunction with Digits 1 and 3 and may only make sense when the whole 3-digit WMI is considered.

It generally describes the vehicle type. This might be a passenger car, commercial, pickup, SUV, truck, motorcycle, etc.

For Volkswagens, the most common 3-digit WMIs you’ll see are:

The next group of six digits (4 to 9) in the VIN describes the exact vehicle type, giving information on the model platform and body style. Each maker assigns its meaning to these six digits. American makers, for example, use the number nine as a ‘check digit,’ but European makers such as VW do not.

ZZZ for VWs old in Europe and many other countries, including Australia. For USA-market VWs, these digits give information on body and trim styles, engine specs, and restraint systems.

Volkswagen’s Vehicle Descriptor Section. Many are consistent with VW’s old model-type system, so you should spot some familiar numbers here. The most common Volkswagen combinations are:

The third and final set of digits, the group of eight from numbers 10 to 17, identifies the particular vehicle in question. They will identify the model year, the exact place where the car was made, and finally, the vehicle’s unique serial number.

The model year. For Volkswagens, this is the year from 1 August to 31 July as before. The code begins with 1980 and assigns a consecutive letter or number for each year (except that I, O, Q, U, Z, and 0 are not used). The codes for year models are:

There are several logical consequences. There is no confusion between 1 and I, two or Z, or O, Q, and 0. The characters repeat the sequence every 30 years, with ‘A’ beginning in 1980, 2010, 2040, etc. And, when the numbers begin after Y, the number coincides with the year.

This is the exact place where that Volkswagen was made. VW has tried to assign specific characters for each of its factories, although there have been some double-ups. If in doubt, consult Digit 1, which gives the region (see above). The codes are:

Six digits, starting with 000001, for each vehicle of the defined make, model, year, and factory. This is the unique identifying number for that vehicle.

We hope you find the VW VIN Decoder guide helpful. Check these troubleshooting and repair guides for more help on your Volkswagen.