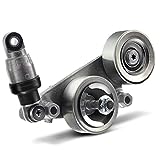 How do you know your serpentine belt is bad?

One of the most common symptoms of a bad serpentine belt is a squealing sound from the engine compartment; sometimes, the squealing is accompanied by poor AC performance and poor cooling efficiency.

Can you drive a Honda with a bad serpentine belt?

You can drive a Honda with a bad serpentine belt; however, once the belt gets damaged, the engine overheats, which may lead to catastrophic engine failure might occur. It is not recommended to drive with a damaged serpentine belt.

Honda vehicles equipped with J35A6 J35A7 engines are typically found on 2005-2012 Honda Pilot, Ridgeline, and Acura MDX. It may also be found on other models.

We hope you find the Honda 3.5L V6 Serpentine Belt Replacement guide helpful. Check these troubleshooting and repair guides for more help on your Honda.