Is your Porsche coolant reservoir having cracks and already leaking, making your engine overheat? By following the procedures below, you learn how to remove and replace the coolant overflow reservoir (coolant expansion tank) on Porche Cayenne. This guide also applies to Volkswagen TOUAREG 2004-2010 and Audi Q7 2007-2015 as these cars are built on the same platform.

The common problem is that the coolant reservoir cracks and develops a leak, leading to coolant loss and engine overheating. Another problem with these units is that the level sensor may fail and requires replacing the whole coolant tank assembly. 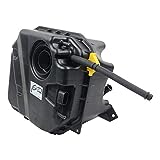 2. Pull the hood release under the dashboard and open the hood.

3. Locate the coolant reservoir on the passenger side of the engine. The coolant expansion tank is black.

4. Remove the black plastic trim that goes around the engine. There is a T25 Torx screw below the windshield washer fluid cap. Open the cap to access this bolt.

5. Remove the air intake pipe. Align the screw notch with the small channel. Next, pull out the screws. Once you remove both screws, you can disconnect the air inlet.

6. Unclip the metal retainers for the air filter housing.

7. Remove the air filter housing completely. There is a 10mm bolt that holds the housing to the frame

8. Use a 16mm socket to remove the torque arm bolt.

Next, remove two 16mm bolts that secure the torque arm bracket to the frame. One bolt is towards the back of the bracket.

Once you remove the torque arm bracket, you will see an exposed T30 bolt that secures the overflow tank to the frame.

10. Disconnect all the hoses from the overflow tank. Use needle-nose pliers to release the clamps.

As you disconnect one hose at a time, keep a container nearby to collect all the coolant that comes out of the coolant tank.

11. Remove the T30 Torx screw that secures the tank to the frame

12. Disconnect the hose on the bottom of the tank.

14. Reconnect the rest of the hoses.

We hope you find the Porsche Cayenne, VW Touareg, and Audi Q7 Replace Coolant Overflow Reservoir guide helpful. Check these troubleshooting and repair guides for more help on your Porsche.