The most common reason a Mercedes-Benz window won’t go up is due to electrical issues caused by the door control module or faulty window regulator/motor.  In addition, when a Mercedes-Benz power window switch fails, the windows will not rise.

Depending on the model, the main switch is located at the driver’s door or center console.

In addition to the window not going up, you may also notice the following symptoms.

Here are some of the most common problems that prevent a Mercedes-Benz window from working correctly.

The door control module on a Mercedes-Benz is the main unit that controls the windows and seats. The module itself can fail and may need replacement. On some models, such as S-Class and W221, the window module software may get corrupted and require an update.

The recommended method to fix this problem is to remove the door panel and replace the window regulator. Note that the window motor will need to be removed; it can be reused and doesn’t have to be replaced.

If the battery in your Mercedes-Benz is partially discharged, the window will go up very slowly and then stop.

To fix this problem, start the engine or use a jump box to jump start it if necessary. Once you jump-start the car and the engine runs, the window should go up and down without any issue.

The wire harness that goes from the door to the body can get damaged. You may have a broken wire inside the accordion rubber piece between the door and frame of the car.

If you open the door and the window operates properly, there is a high chance that one or more wires are cut or damaged near the door hinge.

On older Mercedes-Benz, you should have a fuse for the windows. The window fuse will either be in the engine bay’s main fuse box or on the dashboard’s side.

The window circuit is protected and controlled by SAM and window modules on a newer vehicle.

Now lower the glass to the bottom. Now the glass reaches the bottom, press down on the window switch and keep it pressed for 10 seconds. Once you complete this procedure, your window should open and close with one touch.

If your Mercedes-Benz window is stuck down, try these temporary solutions to close the window. If part of the window is exposed, use the palm of your hand to push the window up as you pull the switch up. This solution works if the window regulator is faulty. Another solution is to get outside of the vehicle and close the doors.

Point the key fob to the driver’s door handle and keep the lock button pressed. You should see the windows go up and close. This works if the problem is due to a faulty window switch. If this temporary solution doesn’t work, you must look at common problems preventing your Mercedes-Benz from rolling up.

Once you check these items, you need to look at other possible causes such as damaged wire harness, water damage, loose ground, or problems with other modules such as the Central Gateway Module.

To further troubleshoot a Mercedes-Benz window that won’t go up, start by reading the fault codes from the door control module.

We hope you find the Mercedes-Benz Window Won’t Go Up guide helpful. Check these troubleshooting and repair guides for more help on your Mercedes-Benz. 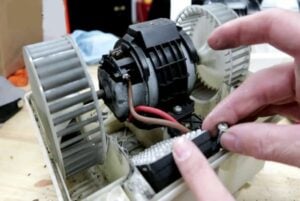