The first-generation Porsche Cayenne (2003–2010), widespread and loved by many today, had a particularly difficult birth. When the first Porsche-branded SUV was announced in 2002, it was met with gasps and cries of heresy from most of the community.

Purists, as we call them, were livid, especially since this was only a few years removed from the notorious “fried egg” headlight debacle of the 996. The reality of the situation was Porsche, the legendary Le Man’s winner, was broke. They were no strangers to financial trouble as a small independent auto manufacturer. In 1969, Porsche bet it all on the 917 race car to resurrect the company’s bottom line, and in 2002, they were ready to do it again. As with many of Porsche’s cars, it isn’t without issues.

The 955 Porsche Cayenne came with two different engines when it was first released. A Volkswagen-designed VR6 and a Porsche-designed V8. Below we will tackle the Porsche V8, as it is unique to the manufacturer. The innovative Volkswagen VR6 was installed in various vehicles in the VW group’s armada and deserves independent coverage.

One of the most common problems with the first-generation Porsche Cayenne is the check engine light coming on. With Porsches, this can mean almost anything as they have hundreds of sensors, and check engine light will come on even if one of them malfunctions.

These can be issues as small as a loose gas cap or as large as imminent mechanical failure. If you’re feeling savvy and want to tackle the CEL yourself, I recommend Durametrics. It is a Porsche-specific diagnostic software that costs about $500. Cheaper Porsche scanners exist (you can learn more about Porsche scanners here), but most OBD2 scanners on the market do not support Porsche products. So if you’re looking for one, make sure it supports Porsche. YOUCANIC full system scanner supports all makes and models.

Mechanically the water pump is very reliable and rarely needs to be replaced. The gasket is different; it is thin and known to fail but is easily serviced.

This part has two rubber O-rings and gets very weak due to heat cycling. A special tool must change the thermostat, but you can make your own with a screwdriver and a wire coat hanger. Straighten the coat hanger and lace it through the thermostat’s top loop.

Wrap the wire around the screwdriver and use it as a handle to pull the thermostat out. This takes some force to remove, so you must pull hard.

Most brittle cooling-related parts are under the intake manifold on the Cayenne V8. Coming out the back of the thermostat housing is a hard plastic transfer pipe that runs to the back of the engine. When it cracks, it leaks coolant into the valley of the engine. This part has such a common failure rate that Porsche released an updated part made of aluminum to remedy the issue.

An extremely thin, hard black plastic Y-shaped hose between the intake manifold and the coolant distribution pipe. This hose attaches to each head, then merges into a single hose and connects to a rubber hose at the back of the engine. The plastic becomes weak over time from the high temperatures in that area and breaks, leaking coolant into the engine valley.

The cooling system isn’t the only thing that breaks under the Cayenne intake manifold, and the starter is under there too. Starters fail. I get that it is a worn item, but every starter I have changed on a first-generation Cayenne has been covered in coolant. Why? Well, if you have read this far, you know why.

Another common issue on the 955 is the ignition coils. This seems like a simple fix, but Porsche loves fancy bolts. There are plastic vanity covers that are bolted to each coil. T25 Torx bit screws hold the covers on; that’s the first tool you might not have. The second one is an inverted Torx or E10. These are common on German cars but aren’t in most toolsets.

The E10 is what physically bolts the coil to the head. The T25 screws into the top of the E10 and only holds the vanity plate on. On one side is the torque mount for the engine; this has to be removed to get the cover off on that side. You can remove it with the mount, but you will break it; trust me, I have.

Engineers at Porsche had to put their brains together to build a reliable, comfortable SUV that could handle the corners on or off the pavement. The Cayenne is over 4,700 lbs unloaded, so to accomplish this, they employed several cutting-edge systems to handle the bulk. This tech in the Porsche 955 could be classified as “the turn of the century” now, so let’s look at what hasn’t aged well.

The Cayenne has an electronically controlled air suspension that uses a compressor pump to raise and lower the ride height. Even minor leaks in the system can cause it to run constantly and wear itself out.

Air struts replace normal gas or hydraulic shocks on the 955. They allow the vehicle to adjust the ride height in off-road conditions. These types of struts are an issue across all manufacturers and are expensive to replace.

The torque mount stands on the left-hand side of the engine bay. This engine mount is used to keep the powerful V8 from twisting. The rubber bushings are known to wear out under the stress of the V8 grunt and are easily replaced.

The first-generation Porsche Cayenne SUV is a big, comfortable, capable off-road vehicle. It has its faults but was very innovative for the time. In my experience as a Porsche technician, most of these cars are on their 3rd or 4th owner now, and good examples are getting hard to find. So if you’re interested in purchasing a 955, be sure to have it inspected by reputable Porsche technicians to ensure it has been properly maintained.

We hope you find the 10 Common Issues With Porsche Cayenne 2003–2010 (955) guide helpful. Check these troubleshooting and repair guides for more help on your Porsche. 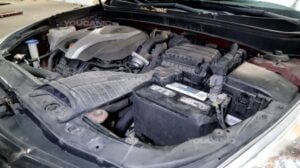