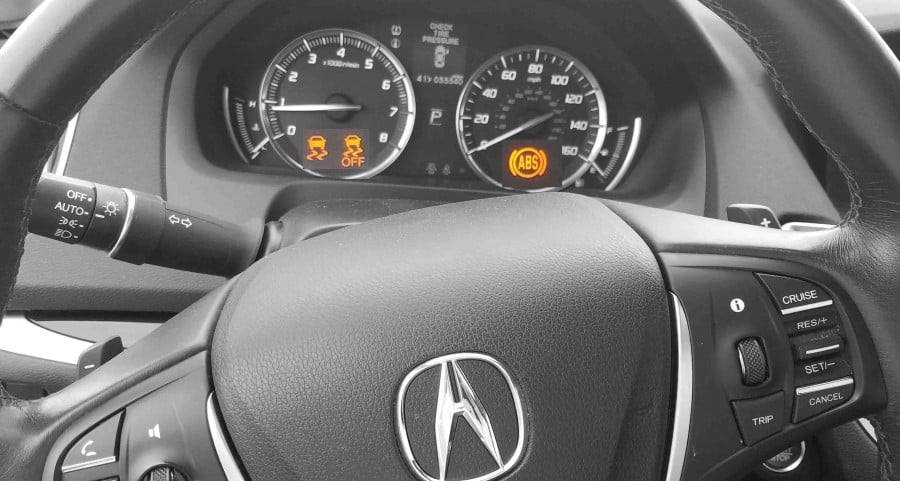 Is your ABS light on? A faulty ABS wheel speed sensor is the most common problem that triggers the ABS light to come on, along with traction and stability control warnings. There is one ABS wheel speed sensor at each wheel of the vehicle. Once one ABS sensor fails, the ABS light comes on; plus, if the vehicle has traction control and stability control, these systems will be disabled as well.

The ABS stands for Anti-lock Brake System. ABS is one of a modern car’s most significant safety features. Since its introduction in the 70s, this system has prevented countless accidents and saved many lives.

The wheels on a car can lock up when braking on slippery surfaces, such as when the road is wet or covered with snow. When that happens, the car will lose traction and start skidding, which elongates its brake distance and makes it difficult to control. To prevent this, the ABS will shortly cut the brake force on skidding wheels, allowing them to regain grip. When the anti-lock brakes activate, the driver could notice the brake pedal will pulsate sharply and quickly.

If ABS malfunctions, the vehicle will warn the driver by triggering an ABS warning. Also, traction control and stability lights will come on if present.

What causes the ABS light to come on?

As stated previously, one of the most common problems that trigger the ABS light to come on is a faulty ABS wheel speed sensor.

Other issues that can trigger the ABS indicator light to come on include:

The Christian Brothers Automotive gives a shorter list of the top four reasons your ABS light can come on.

If your check engine light is on, it’s probably unrelated to the ABS failure. Also, worn brake pads do not turn on the ABS light.

In this article, we’ll find out what might be causing the ABS light to illuminate and what to do when this happens.

When your car’s ABS light comes on, there is a problem with your vehicle’s anti-lock braking system.

While you can still drive the car, it is recommended to fix the issue as soon as possible; otherwise, it could make your car unsafe to drive, especially in extreme driving conditions. ABS prevents the wheels from locking up when braking to improve braking distance. The majority of pre-2010 vehicles did not have ABS brake systems at all.

The ABS, as well as the Traction and Stability control systems, are complex and elaborate systems. As such, these safety systems need all of their components to function in perfect harmony to work properly. Even the slightest failure, such as an implausible signal from the speed sensor, might bring the multiple safety systems down.

When that happens, the ABS and corresponding safety features won’t be able to kick in when the tires lock up or lose grip. So, to warn the driver, the vehicle will trigger an ABS light on its dashboard. Otherwise, drivers wouldn’t know the issue until their car starts sliding while braking or loses traction in slow or hard cornering.

Is it safe to drive if the ABS light comes on?

If your ABS light comes on, you can carefully drive to your destination as long as there is no red brake light on and your brakes still work.

Stop the car and check the brake fluid level to ensure you are not losing brake fluid. Do not drive if the brakes don’t work or you have lost brake fluid.

Drive carefully, as your ABS will not respond in an emergency, which means that if the road is slippery or you brake due to an emergency, the wheels may lock up, and the vehicle may skid.

If the BRAKE warning light is on, bring your car to a stop and do not drive it without consulting an auto mechanic.

While driving a car with an ABS light on is possible, it’s safer to drive a car with working ABS, stability control, and traction control.

So your ABS light is on, and if your car has traction and stability control, those lights are on too. The dashboard can light up like a Christmas tree from a faulty ABS sensor if you have a newer vehicle.

In this tutorial, we will show you how to find out why your ABS and stability control lights are on. We have found that in 8 out of 10 cases, the problem is due to a bad speed sensor. The problem is that the car has four of these sensors; without a tool, there is no way of knowing which one is bad.

We often see owners replace all four ABS sensors in hopes of fixing the issue. This approach sometimes works, but often it doesn’t because they might be elsewhere. In addition, you are spending money and time replacing a perfectly working ABS wheel speed sensor. It is very rare for more than one sensor to fail at a time, let alone all four.

To find out why your ABS and stability control lights are on, we will run a full vehicle scan which shows all the codes and gives us a general idea about the vehicle’s health. For this procedure, we will be utilizing the YOUCANIC full system scanner.

A fault code will indicate which sensor is faulty and needs to be replaced. If you would like to confirm the error code, do the following:

The ABS sensor will need to be replaced if it is defective. This is the most common culprit that triggers the ABS light to come on. Those warning lights will also come on if the car has stability and traction control. This is because these systems rely on the ABS for their operation.

Problems that Trigger ABS Light On

The ABS uses speed sensors at each wheel to determine if they have stopped spinning. Their location inside the wheel hub leaves them exposed to dirt, moisture, or damage from road debris. If this happens, it may offset or interrupt the sensors’ readings, consequently shutting down the ABS.

Some cars have an ABS reluctor ring within each wheel hub, from which the speed sensor picks up reading. With time, they may get rusty or bent out of shape, which affects the speed sensor signals. And if deformed enough, they might even scratch against the sensor and damage it.

A Yaw Rate Sensor (or rotational speed sensor) measures a vehicle’s angular speed about its vertical axis in degrees to determine its direction as it takes corners or as the vehicle tries to roll over.

The ABS module is, in essence, an electronically-controlled hydraulic pump. Its job is to regulate the flow of pressurized brake fluid, which is coming from the brake master cylinder.

These modules, however, may malfunction, causing the ABS to become inoperable. In most cases, the problem will be either leaking solenoids or electronics, both of which are inside the module.

Electrical and electronic systems have a bunch of wiring which connects their components. A wire damage wire may lead to all sorts of issues, including interrupted power supply or signal interference. Lastly, a broken wire might cause a short circuit, which blows up a corresponding fuse.

Despite its complexity, the ABS still relies on the brake fluid to generate the brake pressure that does all the mechanical work. So, if the level inside the brake fluid reservoir is low, the ABS will probably stop working. Checking the fluid levels should be one of the first things to do if there are no other apparent causes.

Do brakes work when the ABS light is on?

The ABS and Stability control, if your car has it, will only take action if the vehicle starts skidding or sliding. For the rest of the time, these safety devices will be on standby while closely monitoring all crucial parameters.

Your car’s brakes will still work, even when the ABS warning light is on. If the wheels lock up while braking, there won’t be anything to help you regain control. It’s the same with Stability control features, which sharpen the car when it starts sliding or drifting. So, if necessary, you can drive your car with the ABS light on, but be extra careful while doing so.

We’d urge you to fix any ABS problem as soon as possible, for your sake and the safety of other motorists and pedestrians. The last thing you want is to crash into the car that stopped before you or slide into the ditch because your wheels have locked up.

What To Do If Your ABS Warning Light Comes On

If the ABS light is on, ensure the red BRAKE light does not come on. You will get a few other warning lights on the dashboard, such as a traction control light and stability control, but don’t worry. These systems get disabled when the ABS doesn’t work.

Drive carefully to your destination. Do not go over the speed limit, and avoid hard braking and acceleration. You are driving a vehicle without ABS, traction control, and stability control, and if the vehicle loses traction, these systems will not intervene. It’s the same as driving a vehicle made in the pre-2000 area, as back then, these systems were very rare to find on a vehicle.

How much does it cost to fix the ABS light?

Once you reach your destination, either take your car to an auto repair shop or get the YOUCANIC Full System Scanner and troubleshoot the problem yourself. Find out which ABS wheel speed sensor is bad ( the most likely cause) and replace it to fix the problem.

The ABS wheel speed sensor is mounted on the wheel hub and is very easy to replace in most cars. A new ABS wheel speed usually costs around $50 and can be replaced in under 30 minutes in your driveway. If you take your vehicle to the dealership, expect to pay around $400-$800 for repair that you can and should be able to fix on your driveway.

What to do if my ABS light comes on?

First, drive moderately, paying even more attention to road conditions than usual. While your brakes will still work fine, there won’t be anything to help you if the car starts sliding. So, you don’t want to find yourself in a situation that requires sudden braking and maneuvering. But still, try to find out what’s causing the issues and fix it as soon as possible.

How do I fix my ABS light?

You can always try turning the car off and then restarting it. Sometimes, the ABS light might stay on because of a glitch within the system and might go away after this reset. But if it stays on, you’ll have to diagnose a problem. You will need a scan tool to access the ABS control module. Using it, you’ll be able to narrow down the problem and pinpoint the faulty part.

The ABS, or Anti-lock Brake System, is a safety device that prevents the wheels from locking up when braking. It makes driving safer, especially when traveling on slippery roads. A big red ABS light will illuminate the dashboard if the system malfunctions. That should warn the driver this safety-critical feature is out of action.