Learn how to replace the auxiliary battery (also known as the small computer or secondary battery) on Mercedes-Benz ML-Class W164, R-Class W251, and GL-Class X164 vehicles. A complete list of applicable models is shown below.

The most common symptom that the small battery needs to be replaced is the car starts and runs fine, but you get a battery warning light on the dashboard that says “Auxiliary Battery Malfunction.”

Use a Mercedes-Benz diagnostic scanner to read the codes. You should get a fault code pointing to a faulty G1/7 auxiliary battery.

The YOUCANIC Full System Scanner can read and clear fault codes through every vehicle’s control module. 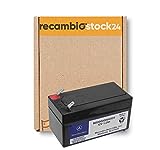 Instructions on changing the auxiliary battery on the R-Class are slightly different than the ML and GL instructions. On the R Class, you can replace the battery without removing the main battery or passenger seat.

Sometimes, the battery warning light may stay on after replacing the battery. If that is the case, check the voltage provided by the alternator.

Also, check that the small negative (brown) wire is connected to the negative post of the main battery.

What does the auxiliary battery do?

One of this battery’s primary purposes is to allow you to shift the car in and out of Park if the main battery fails.

On which models do these instructions apply?

How long does the Mercedes auxiliary battery last?

It can run up to 7 years, depending on the driving conditions and usage.

We hope you find the Mercedes-Benz ML R GL – Auxiliary Battery Replacement guide helpful. Check these troubleshooting and repair guides for more help on your Mercedes-Benz.