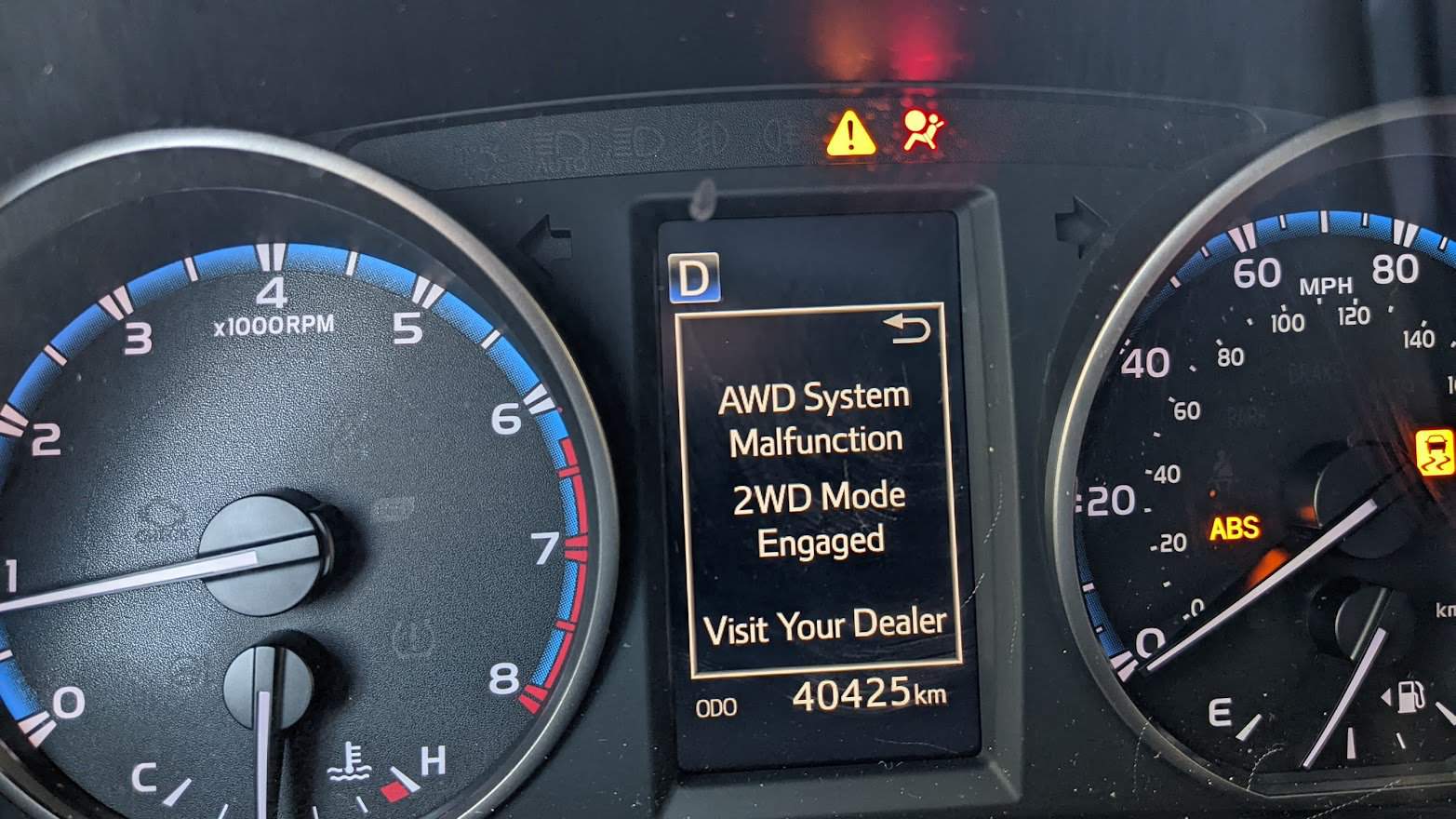 Many Toyota owners are fighting a seemingly endless battle against that dreaded AWD system malfunction 2WD mode engaged message. This means there is an issue with the vehicle’s all-wheel-drive system. Sometimes, this warning will pop up on the dashboard while driving on the highway or just after starting the engine. But in both cases, it will rarely cause any other running or performance issues.

The all-wheel-drive system in Toyota differs significantly from the traditional 4×4 drive systems found in many vehicles. Instead of relying on the driver to engage the 4-wheel drive, this system decides when it is needed. It does this by monitoring the speed of all wheels and throttle inputs and figuring out when extra traction is required. This also means troubleshooting can be difficult or almost impossible without a diagnostic scanner that can read Toyota fault codes.

What does AWD system malfunction mean on a Toyota?

The AWD system malfunction – 2WD mode engaged warning message in a Toyota means there is an issue that deactivated its all-wheel-drive system. This may be down to an engine issue, which may be caused by something as simple as a loose gas cap. Other likely causes include a weak battery or a faulty transmission range sensor. Lastly, the AWD system will disengage if it overheats, which may be caused by a too-aggressive driving style.

To help you out with this, we will go through a list of the most common problems and explain each of them. We recommend using a good scanner to run a full scan on the vehicle to find out why the malfunction is coming on the instrument cluster.

How to diagnose Toyota AWD malfunction

But even after dealing with the suspected cause, the annoying malfunction message may still be on. This is because, in most cases, the system needs to be reset afterward. To do this, use the YOUCANIC scanner to clear the fault codes.

Which Toyota vehicles have the AWD system

The all-wheel-drive system is used in most smaller SUVs, including Toyota RAV4, and some sedans and minivans. It automatically distributes the power between the front and rear axle to achieve the best possible grip without any intervention from the driver. This is where it differs from traditional 4×4 systems fitted in trucks, where drivers select the drive mode by themselves.

Can I drive my Toyota with a malfunctioning AWD system?

Most of the time, your Toyota sends all power to its front wheels. But when the road gets slippery, the all-wheel-drive kicks in. When this system experiences issues, it will automatically shift into a 2WD mode to prevent damage. Assuming no unusual noises or vibrations are present, you can still drive your Toyota in this mode. Still, the available grip in such conditions may be limited, so adjust your driving style.