The most common cause that triggers the stability control warning light to come is a bad ABS wheel speed sensor. The Stability Control light illuminates or starts blinking ABS, and traction warning symbols could accompany traction.

Have you ever noticed a yellow, triangle-shaped warning light with a circle around it on the dashboard of your BMW? It may appear sporadically or stay on permanently, and ABS and traction warning symbols could accompany it. The yellow triangle warning light indicates a problem with the DSC system, which stands for dynamic stability control.

However, BMW DSC is a complex system whose operation relies on several sensors and devices. Tracking down the root of the problem is not always straightforward and can result in unnecessary repairs.

To help you narrow down the problem, we will look at what can cause BMW DSC failure and even give you tips on how to fix them.

BMW’s DSC system determines vehicles’ speed and movement using four sensors, one at each wheel. Because of their location inside the hub assembly, they are exposed to moisture and corrosion.

The same goes for the corresponding wiring and connectors, which may also get physically damaged. This can damage the sensor or cause poor connection that interrupts communication between the ABS module. Additionally, the readings from the sensors may be incorrect, which confuses the DSC system and causes unusual behavior.

Another common DSC system failure point is a metal band wrapped around the drive shaft called the reluctor ring. It has a series of slots on its surface, which the speed sensor uses to determine how fast the wheel is spinning. With time, the ring may corrode and eventually bend out of shape. Consequently, the deformed surface could start touching the speed sensor and damage it.

Most modern BMW cars have a steering angle sensor that the DSC system uses to determine whether the vehicle is turning as the driver wants it. The sensor itself rarely fails, although the wiring within the steering wheel column may break, causing DSC system failure. The clock spring behind the steering wheel is the usual weak point.

The driver, or one of the passengers, may unintentionally turn off the DSC system by accidentally pressing the button on the central console. This would, however, only last until the car is turned off. The DSC system is designed to initiate itself upon every ignition. Still, the DTC button may be jammed or short-circuited, causing the DSC to turn off when the car runs.

DSC system relies on the ABS and its modules for a part of its function. If this component malfunctions, it may also cause DSC system failure or affect its operation. Still, these issues will usually trigger a range of brake-related warning lights.

As obvious as it may sound, a lack of grip from the tires will cause the DSC light to flash as the system engages. Although most drivers will notice if the tires on their car are bald and need replacement, there are several other possible issues. This includes worn shock absorbers and suspension misalignments, which can cause one of the wheels to lose contact with the surface beneath it. Non-matching tire sizes can also be why the stability control light comes on.

How to track down the issue

When the DSC light is on, the first step is determining what is causing the issue. This involves hooking the car to a diagnostic device to see what is happening inside the DSC system. But to do so, you will probably need more than a simple scan tool, as most of them have no access to these modules.

Instead, you will probably need a BMW YOUCANIC full system scanner or an application like Carly. With access to all relevant control modules, you will be able to see if there are any stored error codes, which will help pinpoint the cause of the problem.

Even if there are no stored codes, you can observe if the readings from sensors make sense and match the actual conditions. For example, a speed sensor giving implausible read-outs will occasionally show that its wheel is spinning at different speeds from others.

Having determined the cause of the problem, you can now replace the faulty component. In most cases, removing the old part and fitting the new one is easy. There is, however, one thing to consider when dealing with faulty speed sensors, especially on the rear axle.

During replacement, you should check the condition of; otherwise, ring. The easiest way of doing this is by inspecting the bottom side of the sensor for wear marks or scratches. If there are any, the reluctor ring is either bent out of shape or corroded. It would help if you first took care of that; otherwise, the new sensor will become damaged again.

Once the component causing the DSC failure has been replaced, the system will, in most cases, resume its function. The only exception is the steering angle sensor, which needs to be recalibrated after replacement. This follows a specific calibration procedure and the diagnostic device’s help.

Can I drive when the DSC light is on?

What to do when the DSC system failure causes a power loss?

As we explained, a DSC light is a triangle-shaped warning light with a circle, which symbolizes issues with BMW’s DSC system. This light will illuminate the dashboard when it intervenes to stabilize the car while driving or when a DSC system fails. The most common failure points are ABS speed sensors and reluctor rings. Other likely possibilities range from malfunctioning steering angle sensors to poor battery connection or even low brake fluid.

We hope you find the Troubleshooting BMW Stability Control Warning Light guide helpful. Check these troubleshooting and repair guides for more help on your BMW. 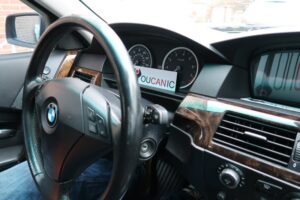